Where underground movement, exploration and combat is concerned, light is absolutely necessary. The various forms of illumination in the game are described below or - with the case of cantrips and spells - given links. In each case, effects of illumination on combat are difficult to manage and usually completely ignored where the game is concerned. Combat rules described below are untested.

Moreover, if a combatant stands between the light and the target, then an additional penalty of -2 should be added to the to hit score. This penalty is cumulative with other penalties listed above.

In some cases, such as starlight or moonlight, both described below, man-made illumination will make visibility on the periphery of that illumination worse, as well as creating penalty causing shadows.

Torches: the cheapest and most available form of illumination. Torches can be made using a strip of cloth (cotton, linen or wool) some two inches wide and 36 inches long, which is wrapped repeatedly and tied around one end of a torch stake about 18 inches long, weighing between 16 and 24 ounces (about 1 to 1½ lbs.). This is then soaked in 1 ounce of whale lamp oil and candlewax. The operation takes about 8 action points (AP) to complete. A torch will last approximately 100 rounds (20 minutes). Torch stakes can be reused.

A lamp oil torch will clearly illuminate to a distance of about 6 hexes; a whale oil torch to 5 hexes. A torch may be put down, though it will sputter out on a wet surface after ten rounds and potentially set a dry surface ablaze (make save against normal fire). In either case, regardless of the oil used, a torch that has been set down will illuminate to a distance of only 2 hexes.

Lantern, hooded or bullseye: because my world takes place in the 17th century, these have a bladder below the lantern's bell that can be filled with up to 4 ounces of whale or lamp oil, which is then adjusted by a valve that controls the degree of illumination. There are only three settings of illumination: off, dim and bright. A lantern burning lamp oil will be brighter, but the oil will burn away faster. 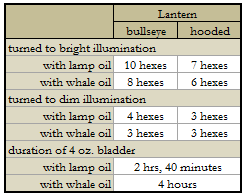 The hooded lantern includes a plate above the illumination that will enable the lantern to be carried without the light shining in the holder's eyes. It does not possess a 'hood' that will enable combatants to black out the light, as is often misunderstood. The bullseye lantern is a directional light that cannot be expanded to shine in every direction (again, a misunderstanding) but does possess two handles at the back that can be closed in order to snap the light closed with a shutter. The bullseye lantern shines a greater distance because the 'eye' is a lens intended to intensify the light. Details regarding how bright each form of light is, depending on the oil used, is shown on the right.

A lantern can be adjusted from from dim to bright, from bright to dim or from dim to off with 1 AP. Lighting a lantern, assuming everything is at hand, will take 4 AP.

Light (spell): the light spell will illuminate perfectly to a distance of 4 hexes. However, all hexes beyond the light spell must be treated as pitch dark; while a magical effect, the spell does not cause a central glow and the division between light and dark is a fixed boundary (making light more useful in a partially lit space or in a room where the whole interior falls into the light's range.

Bluelight (cantrip): illuminates partly to a distance of 2 hexes, so that even within the sphere of the light there is a -1 penalty to hit targets that are not directly adjacent. Increase all penalties for attacking outside the range of the illumination by -1. Treat all weapons and magic items that glow as equal to the effects of this cantrip (including fire beetle glands), with the exception of items such as the wand of illumination.

Notes regarding natural light: below are four levels of natural light. Where penalties to weapons and range conflict (for example, a range of 2 hexes for a dagger indicates -3 to hit while the adjusted medium range indicates a -6 to hit, always use the highest applicable penalty). Also, treat any environment where a forest canopy completely blocks out the sky as dark, listed below. If a partial canopy, then reduce effects to the next least visible natural light. Rangers receive a +1 bonus to hit against the increased negative adjustments listed.

Moonlight, full: includes periods on clear nights where the gibbous and full moon are 45º or more above the horizon. Treat periods where the gibbous or full moon are lower in the sky, or the moon in any other phase than a crescent, as partial moonlight, below. Visibility will be near daylight, though penalties for medium and long range targeting will be increased by 1, to -3 and -6 respectively. Employing any man-made light will spoil the moon's effects, though torches and lanterns will enjoy double the effective range of normal illumination. A torch would therefore allow visibility to 10 or 12 hexes, depending on the oil used.

Moonlight, dim: includes periods on clear nights where the moon's phase shows more light than a crescent, but is not sufficient to provide full moonlight, above. Visibility will enable persons to see one another well enough to fight, though all attacks beyond melee range (1 hex) will suffer a -1 penalty. The ranges of all hurled and fired missile weapons will be halved and penalties for medium and long range targeting will be increased by 2, to -4 and -7 respectively.

The druid spell, starshine, provides effects similar to these - in which case, druids enjoy a +1 bonus with rangers vs. to hit adjustments.

Starshine, ordinary: includes periods on clear nights featuring a crescent or new moon, where the temperature is no warmer than cool. Visibility will enable persons to see one another well enough to fight, though all attacks beyond melee range will suffer a -2 penalty. The ranges of all hurled and fired missile weapons will be reduced to one third and penalties for medium and long range targeting will be increased by 3, to -5 and -8 respectively.

Dark: describes any night in which the sky is clouded or overcast, the moon is shrouded by thick clouds, hasn't risen or has already set, or where the warmth of the night has created a haze or humidity that limits the amount of starlight. Visibility will be extremely poor, so that even persons who are adjacent to one another in melee will fight at -1 to hit and all attacks beyond melee range will suffer a -3 penalty. The ranges of all hurled and fired missile weapons will be reduced to one quarter and long range will be impossible. Medium range attacks will suffer a -6 penalty to hit.