Mages have the widest range of spells in the game, with as many as 30-40 choices of spell per level. Because of this, mages - unlike other spellcasters - have a limitation on the number of spells made available to them based on their intelligence. Players should view this limitation as an expression of the sheer difficulty in having the potential to use such a wide range of spells as exist in the magical lexicon.

Mages gain two forms of magic they can use, the cantrip and the spell. Each is gained as the mage gains levels.

These are of the power of magic 'tricks' - not expressly powerful but useful and occasionally very effective in combat. They are included to round out the mage character regarding role-playing. The types and number of cantrips which an mage begins with are listed in the table below:

See Mage Cantrips for a complete list divided by type. At first level, the character rolls the number of cantrips indicated in the second column and then chooses their cantrips from the lists found on the main Mage page.

As the mage goes up in level and acquires more spells, a random cantrip is also gained for each additional spell gained. If a type of cantrip is rolled and the character already possesses every spell in that cantrip category, the character must forego gaining a cantrip at that time (another campaign may prefer to allow the character to re-roll).

Spells are more powerful than cantrips. As shown in the table below, 1st level mages begin with three first level spells, which may be chosen from the 1st level spell list. Unlike other systems, mages in my world cannot change or alter their spells daily. The list of spells they possess for their characters are the only spells those characters understand. Thus thus must choose carefully at each level, then make the best use of the spells they possess as they can. Like a fighter able to use only a specific list of weapons & skills, the mage (and any other spellcaster) is only able to use a specific list of spells.

Spells are gained at the mage progresses in level: 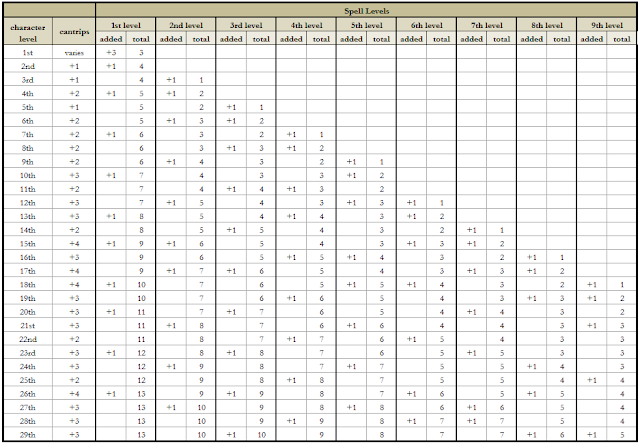 Mages rely upon spellbooks to store the complexity of their magic. To learn their spells, they must study the pages of these books. Illusionists and mages depend greatly upon the maintenance and care of these books; losing a spellbook is a very unfortunate affair.