Describes the state of having a health expressed in less than zero hit points, which all creatures or combatants may possess inherently as a part of their biological units (BU). See Hit Points.

Combatants Without an Experience Level

For creatures that do not possess experience levels, death occurs at negative 4. This means that at -1, -2 and -3, the creature is still alive, though in increasing levels of distress. During combat, at -1 hit points, a creature will be panicked and will turn berserk if that is a part of their nature (bears, boars, norkers, etcetera). As well, at -1 hit points, the creature's strength, intelligence and wisdom (treat wisdom as equal to intelligence), as well as other stats if they are known, should be assessed at 30% below normal (treat as 7/10ths). Most importantly, a creature's action points (AP) are also lowered!

If a creature had an wisdom of 4 normally, at -1 hit point the creature's wisdom would be rated at 2.8.

At -2 hit points, ability statistics are reduced further (4/10ths of normal), so that the same creature would have a wisdom of 1.6. This will challenge the creature's consciousness, so that a wisdom check must be made based on its present wisdom. The creature would need to roll a 1 on a d20 to remain conscious.

Once a combatant has obtained sufficient experience to obtain first level (impossible for any combatant with less than a 3 intelligence), that same combatant will not be killed unless they are reduced to -10 hit points. Generally, reducing a leveled combatant to less than zero hit points works much the same as the description above - except that each negative hit point below zero reduces the combatant's ability stats and AP by 10%. Thus, in the example shown, the combatant's 18 wisdom drops by 1.8 as it drops lower in hit points. 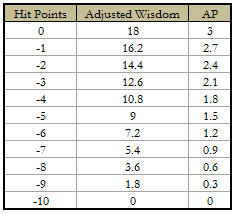 For example, Albert, who possesses an 18 wisdom, is struck for 5 damage and lowered to -4 hit points. He rolls a 9 on a d20, so he remains conscious - but as he is armored with chain mail and encumbered, at -4 hit points his AP has been reduced to 1 (fractions are ignored). Therefore, the most he can do is move away or attempt to attack, knowing he will not have a chance to hit until the following round (assuming action points can be spread over two rounds). Albert chooses to fall back one hex - but then he is hit again for 3 damage, lowering him to -7. Now he must make another wisdom check. He rolls a 6, one above what he needs, and falls unconscious.

As he does, however, Bala casts cure light wounds and touches Albert, restoring five of his lost hit points, bringing him to -2 hit points. Because his status has been altered, Albert makes another wisdom check. He needs a 14 to regain consciousness, but unfortunately for Albert, he rolls a 16 and remains unconscious. Resolved, Bala retrieves a healing salve and feeds that to Albert. Thankfully this gives him 2 more hit points, bringing his total to zero. Once Albert is at zero hit points, he automatically awakens without needing to make a wisdom check.

The DM may, reasonably, allow a combatant some ability to perform part of an action point depending upon what action is chosen. In the example above, when Albert is lowered to -7 hit points, even if he had succeeded he would only possess 0.9 action points. This should still be enough to express three spoken words instead of four, or perhaps drink a lesser part of a healing potion, getting a fifth of it inside him each round until the whole potion is drunk.