When a creature's body is hurled, broken, subjected to fire, lightning or various forms of magic, dragon's breath, as well as a host of other unpleasant attacks, most resulting in a loss of hit points, it is presumed that the objects carried by that creature may also potentially be destroyed. The table below is intended as a list of saving throws for those items: 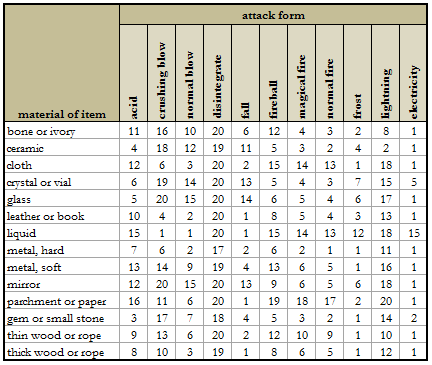 All magical items, regardless of material or the presence of any bonus, receive a +1 to save against these attacks. Items that have a described higher bonus (such as a sword +2 or armor +3) receive a modifier equal to their ascribed bonus. Moreover, if the creature attacked possesses a ring of protection, the ring's influence applies to all objects carried by that person, regardless of whether the object is magic or not.

Furthermore, all items, regardless of being magical, gain a +5 saving throw against attack forms for which they were expressly designed to defend against: shields and armor struck by a crushing blow or fall, fireball vs. a ring of fire resistance, frost vs. an ice wall, lightning vs. a conductive metal or substance, etc.

Only items that are directly exposed to the attack need make save. Thus a spellbook or scroll need not save so long as the box or case protecting it saves; a character's doublet need not save if the character's armor and hauberk saves and so on. However, some attacks, such as disintigrate and electricity, will affect every item regardless of its physical exposure. Frost will eventually affect everything that is not kept warm.

acid: includes black dragon breath, giant slug spittle, ankhkeg enzyme (applied to cloth, leather, paper and wood only) and various varieties of splashed vitriol. Note that unless the volume of the acid is considerable, splashed acid will mean that only a few areas of the defender's body can be affected.

crushing blow: describes any intensive blow causing the equivalent of 33 damage, whatever the source. If no damage accrues to a given creature, say in a fall, roll damage to the object as if it were a creature to determine the strength of the blow. Treat all successes to hit an object with a weapon as attacking AC 10 and causing double damage (triple if a natural 20 is rolled).

In a fall involving a creature, only objects on the side of impact need save - other objects are presumed to be cushioned by the creature's body. With regards to an attack, there is a certainty that the blow will fall on the defender's shield or armor, with a 50/50 chance for each - so these things should save first before any other object on the body must also endure the blow. Note that an item carried over the character's armor, to make it accessible in combat, should also have to save if the armor is struck.

Note that the category also includes a ceramic flask or a glass/crystal vial that is thrown directly down on stone/tile/metal/hardwood at a distance of no more than 10 feet distance would also save vs. crushing blow. An object hurled at a greater distance would be treated as a 'normal blow' for saving purposes.

normal blow: describes a blow causing between 11 and 32 points of damage, whatever the source. See crushing blow, above.

fall: includes both the circumstance where a creature falls or where something falls upon the creature. Includes only falls where between 1-10 damage results - otherwise, the fall should be treated as a crushing or normal blow. If no damage accrues to the object, due to the height of the fall or the surface fallen upon, no save in necessary. See crushing blow, above.

fireball: this is reference to the 3rd level mage spell of the same name. As the effect of the spell is instantaneous (it lasts a split-second), a failed save will only result in ruination in the case of delicate liquid chemicals or magics (such as potions, oils, ointments and salves) and pieces of parchment, such as scrolls. These have a 20% chance of being made unreadable unless the reader possesses that spell as one they are normally able to use.

magical fire: describes any sustained magic fire to which an object is exposed for a significant part of a round, in the case of a wall of fire, burning hands, flame strike and so on. Flammable objects that fail saving throw will alight with normal fire. All objects except for paper should be considered scorched, smoked or singed and reduced in value by 20%.

If an object should save but remain exposed to magic fire for an additional round, then it must make save again. If an object has failed save and is not removed from the magic fire, the damage to that object will increase by 20% per round of exposure, until after five rounds total it is completely useless. An object that has only been damaged by 20% may be polished or otherwise restored to its original value.

normal fire: describes any sustained ordinary fire to which an object is exposed for two full rounds, such as the case of a direct hit with burning oil, a creature that has fallen into a firepit while stunned (and unable to hop out) or is trapped in a burning environment such as a building or forest. Flammable objects that fail saving throw will alight. All objects except for paper should be considered scorched, smoked or singed and reduced in value by 10%.

If an object should save but remain exposed to fire for an additional round, then it must make save again. If an object has failed save and is not removed from the normal fire, the damage to that object will increase by 10% per round of exposure, until after ten rounds total it is completely useless. An object that has only been damaged up to 20% may be polished or otherwise restored to its original value.

frost: describes any situation, magical or otherwise (temperature, breath weapon, spell, etc.), where the temperature of an object has been lowered to less than zero degrees Celsius. Note that if an object is protected under clothing, it should not be required to save - but eventually even such protection will fail to stop the object from suffering from frost. Treat a failure to save as the object being split apart from ice that has expanded; paper, when it thaws, will grow wet and useless; mirrors, glass and vials will crack and so on.

Note that hard metal, if frosted, will suffer a -10 modifier to saves if it suffers from a fall, a normal or crushing blow, disintegration or electrical attack.

lightning bolt: describes both natural and magical bolts of lightning that pass through both creatures and objects. Take note that magical lightning does not require that the target be grounded - otherwise, the effect is the same. All objects on a creature struck with lightning must make save.

electricity: describes all electrical discharges other than lightning, such as the shock from an electric eel, effects from a glyph, traps, etc. As with lightning, magical electricity does not require the target to be grounded. All objects carried on a person affected by electricity must make save.

bone or ivory: describes objects that are essentially decoratively carved or otherwise fragile; unworked bones or tusks should be treated as thin or thick wood, depending upon its diameter.

ceramic: includes earthenware, crockery, flasks, amphorae for carrying water and porcelain. Art pottery, such as faience and majolica, should be treated as crystal or vial. Ceramic flasks must fail saving throw and break before they can spread oil over a surface or enemy.

cloth: includes all forms of clothing, blankets or drapery not made of leather. Any food carried by the party should save equivalently to cloth.

crystal or vial: includes glass made in part with lead (including crystal balls) or small, strengthened forms of glass such as vials, lenses, figurines or ornaments.

glass: describes more delicate glass such as the bell of a lantern, glazed windows, bottles and so on. Smaller or solid pieces of glass should be treated as crystal or vial.

leather or book: includes leather and studded leather armor, tack, harness, straps, belts and most similar goods. Books without leather binding and less than 50 pages should be treated as parchment or paper - otherwise, the thickness of the book or its leather covering should help preserve it.

liquid: includes alchemical concoctions such as vitriol, aqua regia, distilled and fermented beverages, vinegar, whale and lamp oil, perfume and poison, as well as magical potions, 0ils, ointments and salves, which must make save even when the container holding them remains intact. It is presumed that a failure has caused a chemical reaction that will make the liquid taste terrible, lose its potency or potentially explode.  See Grenade Missiles.

metal, hard: includes all smithed and wrought metal, used to make weapons, armor, tools, nails or other construction materials. The thickness of the metal is unimportant, only the manner in which the metal was forged.

metal, soft: includes all shaped or cold-hammered metal, including jewelry, that has not been hard-forged into shapes and angles before manufacture. Organic gems, such as mother-of-pearl, pearls and amber should roll according to soft metals.

parchment or paper: assumes loose sheets of paper or thin, unbound pamphlets of vulnerable paper. Includes magical scrolls. Apply these saves to dried leaves, without a bonus, and to dried stubble or crops, with a +2 modifier. In each case, a save should be made per round of exposure.

gem or small stone: describes any hard stone smaller than a fist in size. Larger stones are virtually immune to destruction, even by disintegration.

thin wood or rope: describes any object in which the principle diameter of the object is less than one inch, such as arrows, ordinary rope, bows, wooden weapons, tools, etc.