Due to recent changes in underwater combat mechanics, much of the content of this page is now out of date and needs rewriting. It is being left here as a placeholder until the content can be adjusted; it should not be considered accurate for the purpose of my campaign. 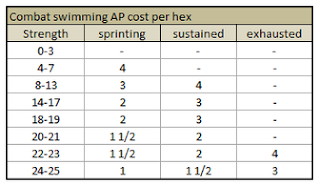 Combatants who engage in melee while swimming must have one hand free, with which they can turn or maneuver themselves. The table on the right indicates the number of action points that must be used in order to move one combat hex. Thus a combatant with five AP and a 14 strength would be able to swim with one hand a distance of one hex, retaining enough AP to swing a weapon in the same round.

Combat progresses normally in water, though it is presumed that the combatant will be dunked by the effort of swinging a weapon. Dexterity functions normally. Weapons can be thrown but bows or crossbows cannot be effectively loaded or fired.

There is a severe penalty for striking with or hurling a weapon while swimming that equals -1 to hit per length of the weapon per foot. Obviously, weapons that require two hands cannot be used while swimming.