A roll of the dice used to determine whether a non-melee attack is effective against a character or monster. The actual means by which an attack is avoided or resisted is typically and deliberately overlooked in order to promote a better game-playing experience.

However, incidents do occur where circumventing the attack is well nigh impossible - such as having been paralyzed and thus wholly unable to move, only to have a dragon bring its snout to a distance of five inches before breathing out fire. In such cases, the agreement or at least the understanding of the party having been obtained, the saving throw may be waved by the DM in order to maintain verisimilitude in the campaign.

Apart from such instances (which must be necessarily very, very rare), the following rolls must be achieved in order to dodge, elude, withdraw from, escape, fend off, resist, overcome, forbear, hold out against or stand up to the following attacks, for characters of the indicated level (see below for notes about monsters): 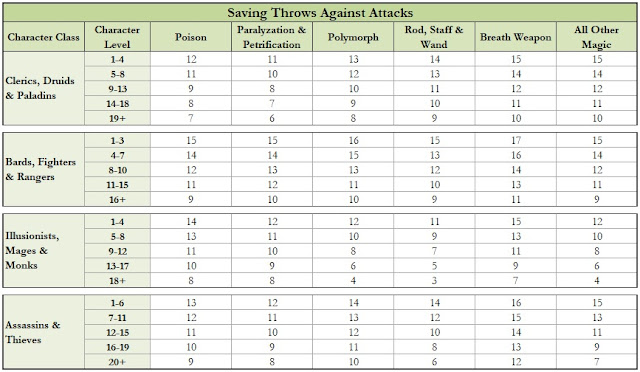 Regardless of the magical result, all saves against rods, wands and staves should be applied to that column.