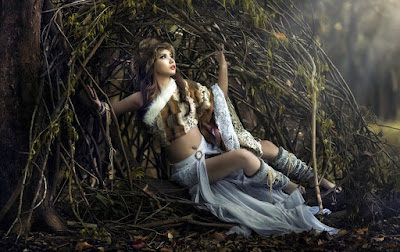 Allows the character a chance to seek an area within a woodland that is covered with moss, that in turn has gathered to it a portion of wild magic. Having found it, the character is free to make it a bedstead for personal use or to encourage a companion to do so. Whomever sleeps upon the moss carpet (which will be quite dry, comfortable and entirely safe) will gain three benefits from doing so.

This magic drain will occur with the dawn at any rate, having granted to the retiree its three magical blessings. As noted above, if the character wakes in the night and takes action, no hit points will be gained and no ability stats will be restored. This will also mean that no moss bedstead can be used twice. Typically, it requires from 2-5 years for a given bedstead to gather enough magic to impart it to a sleeper.

The chance of a player finding a bedstead during a day (whether in travelling off road or in deliberately searching ) is equal to the number of points of knowledge they posses in mosses & ferns. Note that the time of discovery, when it is discovered, will be a random d12 roll, from 8 AM to 7 PM. (08:00 to 19:00). The bedstead, if found, will not always conveniently be found at end of day. The player should be permitted to roll their chance on a d100 during each day of wilderness travel if they so desire.

A bedstead cannot be seen from a road or in any area of considerable habitation. They exist only in the wild.