The following indicates the animals that can be called in desert-vegetation biomes. 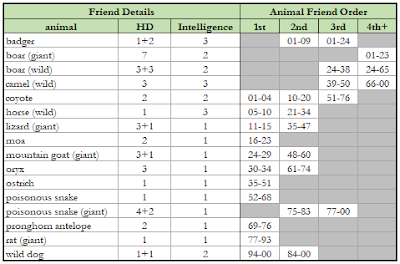 Shown is a list of animals, their hit dice and their intelligence.  The first animal a character calls should be rolled on the "1st" column; the next animal on the "2nd" column and so on.  All animals after the fourth are rolled for on the "4th" column.

Druids and rangers are permitted a set number of animal friends according to their level.  While usually a character will call a new animal as soon as the boon is gained, it may happen due to circumstances that more than one animal may be called at a given time.  In such cases, the die should be rolled separately for each animal.  Each roll will call one animal, regardless of species.  Called animals may be of the same species as animals already possessed.