This wiki is a description of Alexis' Dungeons and Dragons' world, which is far reaching and complex. This fictional setting is based on the real earth, its geography, its peoples and its cultures, including religious and philosophical components. The world freely interprets these things for the purpose of running a D&D campaign, and does not hesitate to change, throw out or add information as needed, in relation to every subject to be found in this wiki. Therefore, it is stressed that ALL of the material within is most likely FALSE in its descriptions of real things, particularly within the heading,"mythology." Alexis likes to take largely disparate ideas and press them together into new ideas, without concern for actual human reality. After all, Wikipedia exists. There's no need to be accurate about anything here.

Below are general headings for the wiki's contents:

The following are books written by Alexis Smolensk, the wiki creator, related to Role-playing and Dungeons & Dragons:

How to Run: An Advanced Guide to Managing Role-playing Games

In forty years, the role-playing community has sorely lacked a savvy investigation of the art of DMing, targeted exclusively for the long-standing enthusiast. For the first time, we have a book that presumes the reader knows what a role-playing game is, and how it is played, wasting no time covering old ground. Instead, How to Run exhaustively examines how to present the setting, handle players, draw forth emotion, cope with information overload and make a world from the ground up, step-by-step and point-by-point. Alexis Smolensk hasn’t written a dry, academic treatise of the game, he’s written an empowering field guide for grognards seeking illumination. No serious campaigner should venture forth without this book in their backpack!


How to Play a Character & Other Essays

In ten essays discussing the ins and outs of role-playing a character, the present state of D&D, the aftershock of DMing a game and more, Alexis Smolensk uses his 35 years of experience running and playing the game to entertain and challenge the minds of role-players everywhere. Smolensk pulls apart the motivations behind there being multiple editions of the game, making and breaking camp in the adventure and the intricacies of wild magic, offering humour and inspiration as well. Called by some a mad scientist of RPG writing, and by others a ‘Quixotic bastard,’ Alexis Smolensk may be the most gonzo, over-the-top old school grognard that has ever run the game!


The Dungeon's Front Door & Other Things in the Deep Dark 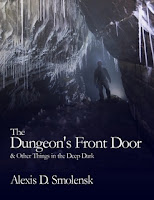 Join an intrepid, rakish day adventure into the fantasy dungeon, the staple of fantasy role-playing games. Here are 13 essays surveying the sub-structure of dungeons and their philosophy, what makes them popular and what we can do to expand their potential. With humour, inventiveness and biting sarcasm, Smolensk uncovers the relationship between dungeons and post-apocalyptic survival, digs into the megadungeon, breaks the fourth wall and reveals the dual natures of time and fate hidden behind the Dungeon’s Front Door. A great experimenter, there are few who can compare with Smolensk’s drive and dedication.

If the reader learns of any issues that need attention, please contact me either through email at alexiss1@telus.net or leave a message on this blog post.
at February 20, 2018