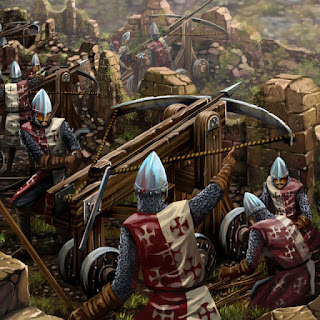 Similar to a giant crossbow, the weapon relies upon two levers with torsion springs consisting of several loops of twisted skeins. The parts of the bow which form the ends bend towards one another by means of a short rope fastened between them; a shaft is placed into a groove, which is about one half the length of the missile fired, but four times as wide. As the missile is discharged from the shaft, wooden fletching produces a controlled ballistic; the missile hits objects with great force, commonly killing an ordinary person outright on a clean hit, even through armour.

Ballista can be mounted atop walls and on ships. Small ballista of special design, called carroballista, can be emplaced on large wagons.

Ballista bolts will split into dangerous splinters when hitting hard surfaces (applies only to missed shots), which creates shrapnel.