Most combat is perceived to occur upon a flat, reliable surface, but this is not always the case. It may happen that a combatant finds it necessary to fight while climbing, whether to reach a surface or against something while holding onto the side of a precipice, or when perched on high place, such as a ledge or to top of a structure. As well, combatants may be compelled to fight upon swaying bridges, upon logs or other natural traverses over drops, while standing up on a boat or upon the edge of a large floating vessel, in rainstorms and windstorms, or upon loose soil or slippery snow. All of these conditions can challenge the combatant to maintain their footing ~ however, the sage ability to fight when unsteady exists to mitigate these dangers and inconveniences.

Dexterity checks described below are made each round that the combatant is attacking under these conditions, or when the combatant has been stunned.

We begin with recognizing that combatants with no special training in balance will find themselves in the above conditions without any special benefits from the study of balance. It is desirable that combatants see these situations as very dangerous, with the sort of penalty that causes them to retreat rather than risk fighting, except when retreat is impossible. Thus, a mere -1 or -2 penalty to dexterity for many of the above is not sufficient! An untrained combatant in such a situation should certainly have a greater chance of succumbing to the conditions than not, so therefore the penalties must be such that they cannot be easily ignored.

We can consider a template for those modifiers based on a number of categories:

Suppose that in each of the above cases, rather than try to establish a complicated set of measurements, we describe the degree of these categories in terms of their threat-level: uncertain, risky, dangerous and suicidal (see below). An uncertain condition will force a normal dexterity check. A risky condition will give a -3 penalty to the character's dexterity. A dangerous condition will give a -6 penalty. A suicidal condition will give a -12 penalty. If a given circumstance seems variable (a cart starting and stopping, wind swinging wildly around, ship under random bombardment, etcetera), then an increased penalty of -1, -2, -3 and -4 should be given for each corresponding threat level.

It is important to note that, since the threat-level can be a composite of more than one category, in different degrees, the total penalty is the combined penalty for each individual conditional effect! Thus, a character standing on a moving horse, where the surface of the horse's body is the twice the character's own body size, high enough to take some damage, while a near gale is blowing, would have a total penalty of -18 to their dexterity check. Therefore, while none of the perameters are suicidal, the combatant would almost certainly fail their dexterity check.

Note that for any person able to obtain a permanent hand-hold, one that is not moving in relation to the character (though it might be moving in relation to the world around, such as a horse's pommel), the total threat-level will be reduced by half. This applies to both trained and untrained combatants alike. Note also that for those able to ride an animal such as a horse or a camel, actually riding the animal gives no penalties to dexterity (though an untrained rider must roll dexterity when attempting to ride and fight ~ treat as risky). 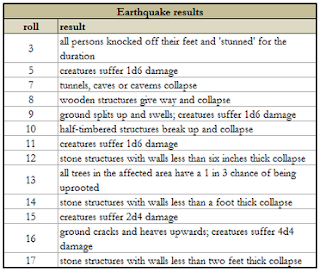 Email ThisBlogThis!Share to TwitterShare to FacebookShare to Pinterest
Labels: Combat