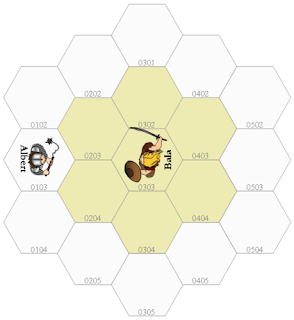 Describes a state wherein creatures are engaged in hand-to-hand combat. It is presumed that whenever creatures are in combat, both sides are simultaneously attacking and defending, though for game purposes the actual resolution of the combat is turn based.

Melee is presumed to occur whenever combatants are adjacent to one another. In the example on the left, Albert and Bala are not in melee. They may throw things at each other, but it is presumed for combat purposes that they are not engaged in hand-to-hand combat.

If the two are combatants and Albert moves into any of the combat hexes immediately surrounding Bala, then melee has been established. Albert can move into 0104 and then into 0205, around Bala, without establishing melee, because this does not put Albert adjacent to Bala. In such a case, we can imagine the combatants moving in wide circles around one another, avoiding engagement.

However, if Albert tries to get to 0205 through 0204, he will be engaged by Bala in melee. Even if it is not Bala's turn, it is still presumed that Albert is engaged and must defend himself. He has placed himself into "melee." He must deal with Bala's threat either by remaining and attacking or by withdrawing in the same movement. However, there is a movement penalty (see below) for moving out of a melee hex. If Albert does not have enough movement to withdraw, he must remain and allow Bala to take an action.

A combatant can force an enemy into melee simply by moving into an adjacent hex, even if they do not have enough AP to attack. For example, if Albert uses his last AP to move into 0204, then Bala would have to fight or expend the 1 AP penalty herself to retreat from hex 0303.

Combatants using weapons may not move into an opponent's hex, except when charging, overbearing or grappling. These are unusual circumstances; see the rules under these combat forms for how to resolve moving into an enemy's hex.