Goods that are traded must originate somewhere in the world. This requires that we make choices as to which goods will exist in given locations, and how important those goods are. We increase the importance of goods by increasing the number of references for that good; this in turn increases the quantity of goods produced, which will cause the price of that good to decrease. 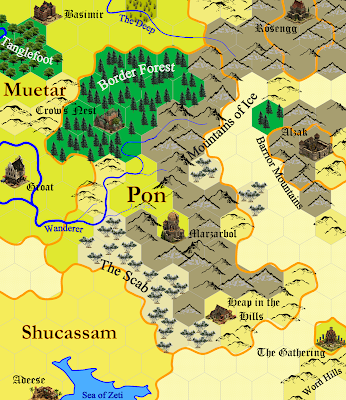 To demonstrate where to place goods, we will need a map, such as the one on the right. This page will be dealing only with the region of Pon, including three centers: Crow's Nest, Marzarbol and Heap in the Hills ("the Heap" for short).

We want to use the map's details: there are five principle environments in Pon: forest (dark green), hills (dull yellow), mountains (brown), plains (dull green, featureless) and scrub (grey). Each should offer clues for where we would want to place the various goods on our list. We want to give this a much thought, as placement will do more than simply designate the origin of the good itself - it will also flesh out the culture and practices of the people living in that area.

We shouldn't assume placement is always obvious. Starting with the raw goods in our list (bricks, cattle, clay, fish, gold, grain, grapes, horses, ores, sheep, spices and timber), we can easily suppose that if there is any fish in Pon, it must be found in the big river, the Wanderer. But do we want there to be anyfish at all? At some future point we are going to certainly place fish in the Sea of Zeti, on the south edge of the map - will we want there to be local fish that conflicts with that trade? Perhaps yes - and at a certain point we may wish to make a distinction between freshwater fish (which would be caught in the river) and saltwater fish (caught in the sea).

Similarly, grapes might be grown on the plain between Marzarbol and Crow's Nest or it may be grown on the south slope of the mountains above the Heap. Wine probably wouldn't be grown on a range known as the 'Mountains of Ice' but the name might be ironic (after all, wine is grown in Swiss valleys between high, icy mountains). Where we place the grapes will make a difference as to what sort of wine is produced. Similarly, beef cattle would be raised on the hills or in the scrub, but dairy cattle would be raised in the forest or on the plain.

We're making an effort to keep this system simple as possible, so let's impose an experimental guideline (one that can be adjusted later, as we wish): let's agree to list 2 references for each raw good: sometimes placing both in one area and sometimes splitting the references up. Furthermore, I'll try to designate the most obvious placements, recognizing that later on we may want to impose changes there, too. Here's a breakdown of the five environments and their probable references:

I've listed the number of references for each good in brackets. This brings us to the next consideration.

Our next action is to decide which city controls which resource. We must assume that the herders, woodcutters, farmers and so on will have a tendency to bring their goods to specific markets - and that those markets will adapt to service particular industries. For example, since Crow's Nest is in the middle of the Border Forest, we can feel assured that Crow's Nest's market will gather together the timber and spices in Pon.

However, some places along the Wanderer river are closer to Marzarbol than to Crow's Nest - so it makes sense that the fish caught in the forest and mountain country of the river will make its way to Crow's Nest, while the fish caught down on the plains will be collected at Marzarbol. Similarly, though we've placed all the horses in the hills, there are hills east of Marzarbol, on the edge of the kingdom, and directly south of Crow's Nest, along with the larger region of hills around the Heap.

One way to solve the problem would be to give one reference per hex where there are hills - but while this is easy for placement purposes, it tends to create sameness with regards to the cultures we're creating and unless we cut down the amount of quantity per reference, we'll produce so much product that the players won't much notice a change in price from place to place. Remember: in scarcity there is conflict. Too much of anything and players grow too content to feel any drama. 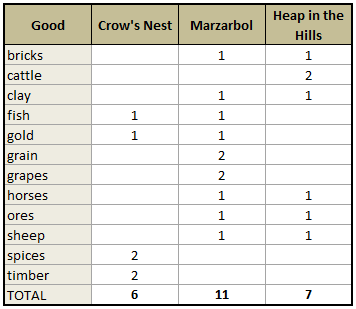 If we choose to make that small patch of hills east of Marzarbol so special that both horse references originate there, we make it a very critical hex for the Pon's military concerns, we create a patch of localized tremendous wealth and we denude the rest of the kingdom of horses. On the other hand, if we put all the horses around the Heap's hills, we spread the horse culture out somewhat and create drama in the possibility of horse raiding from The Gathering (which is a troll village in the original game this map comes from).

Similar questions arise with clay that comes from the scrubland - does it come from The Scab or from that little patch of scrub northeast of Marzarbol? Does Marzarbol control all the goods of the plains or does the Crow's nest control some of it? And what about the mountains? All three markets have access to those.

So that we can move onto the next step, I'm going to sort the references out and list them in the table below. I'm going to split both the hills and the scrub between Marzarbol and the Heap, give all the plain to Marzarbol, all the forest to Crow's Nest and split the mountains between all three - simply because this seems most obvious. Marzarbol is the capital, so it gets the lion's share. Trade shouldn't expect to balance evenly between the markets - uneven, again, creates tension.

This leaves a second group of goods: brewing, cloth, leather goods, meat, metal goods, pottery, skins, wine and wool. While some of these things could be processed in virtually any part of the kingdom, since we're talking a low technology, for simplicity's sake let's simply put each in one of the three markets. For the same reason, let's give each just one reference - again, this can, and will, be adjusted later.

The key first is to reason through how each of these things comes into being. Brewing is made from grains, so it would most likely be made in Marzarbol - but of course grain is shipped into both Crow's Nest and the Heap, so either of them could have developed a brewing culture. Cloth is made from wool, which is in turn made from sheep - which we know are found in both Marzarbol and the Heap. It could be that both markets make wool and that one ships wool to the other to make all the cloth in the kingdom - but we have stipulated only one reference for both. Making 'wool' is much more complicated than merely shearing it; it must be cleaned and pounded and carded - so the raw wool could be collected in Marzarbol to be shipped to the Heap, where it is made into usable wool that is then made into cloth. Or vice versa. It is up to us.

Remember that unlike our culture there was a strong tradition of destroying competition - meaning that not everywhere made the same products like we do in our present day. It takes training to make cloth - and if all the people who can do that training are stolen away and brought under the control of a guild in the Heap in the Hills, it doesn't matter if people in Marzarbol have sheep - they don't know how to properly clean wool and make cloth, and in any case the King wants the guild in the Heap to be happy, so there are actually laws againstcleaning wool in Marzarbol. However little sense that makes to our free enterprise sensibilities, this is how the world once worked - and it is favorable to us as game players - because scarcity builds conflict. So make scarcity, not sameness!

Leather goods, meat and skins come from animals. Metal goods is made from ores, pottery is made from clay and wine is made from grapes. We can make a lot of other products, too, but we're going to restrict ourselves to these, because we only need enough to explain the system.

Below is a breakdown for manufactured references. We don't need to note number of references (it is always 1 for now), so I'll just give a list:

I've put brewing and metal goods into the forest because the fuel from the trees makes the best opportunity for heating the grains and the forges that are necessary. These details matter. It means that although the Crow's Nest mountains produce no meaningful ore, the ore from those mountains that do (around Marzarbol and the Heap) must be hauled to the furnaces and waterwheels of the Border Forest to be processed. So what will the party find on the roads? Wagons full of stone making their way steadily north to dump their valuable loads.

This concludes the placement stage. Our next step will be making roads, determining distances and transport.